22 kanwariyas returning from Gangotri with water were trapped in the forest overnight, rescued amidst heavy rain 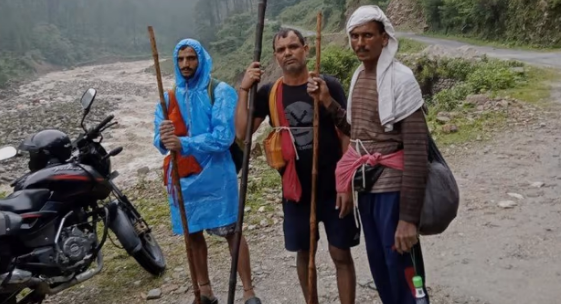 22 Kanwar Yatris from Uttar Pradesh were stranded overnight on Belak-Budhakedar trek. He lost his way due to rain. In the early hours of Wednesday, the team of SDRF and Revenue Police rescued the Kanwariyas from Belak and rescued them safely.

Due to heavy rains last night, there has been a lot of devastation in the Budhakedar area of ​​Bhilgana block. The water level of Dharma Ganga river has crossed the danger mark. Due to which the water of the river has reached the fields of Ragsya and Bhondi villages. Also, a major part of the Budhakedar-Pinswad motorway has been damaged due to the flow of the river.

22 Kanwar Yatris of Uttar Pradesh returning from Gangotri after getting waterlogged due to heavy rains were stranded overnight on the Belak-Budhakedar trek. He lost his way due to rain. Which he informed the administration. In the early hours of Wednesday, the team of SDRF and Revenue Police rescued 22 Kanwar Yatris from Belak and rescued them safely.

Revenue sub-inspector Budhakedar GS Rawat said that these passengers included three women and 19 men. Told that Kanwar pilgrims reach Budhakedar from Trijuginarayan-Bhatwari-Belak-Budhakedar by filling water from Gangotri on foot. After this he goes to Rishikesh via Ghansali, Pipaldali, Koti, Chamba.