Due to heavy rains in Varanasi, water logging on many roads and water entering the shops, 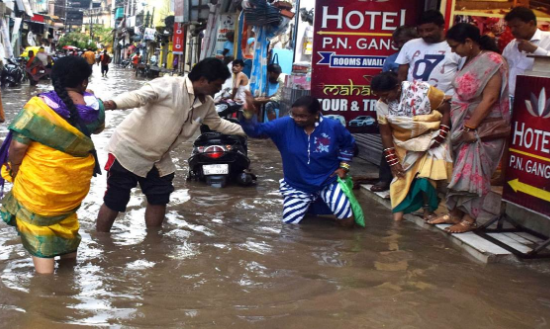 Water Logging in Varanasi After the rain, the preparations for drainage in the urban area were exposed. There was no such area in the city where water would not stagnate on the roads. Sewage was flowing due to overflow of sewer line in the smart streets.

Jagran Correspondent, Varanasi: After the rain, the preparations for drainage in the urban area were exposed. There was no such area in the city where water would not stagnate on the roads. However, when the rain stopped, after a few hours, the accumulated water in most areas was drained.

A knee-deep water had accumulated on the Dashashwamedh Ghat road, developed as the Pink Corridor. The worst situation was that of Kodai post where water accumulated so much on the road that the shops were filled with dirt. The electronics and electrical items kept in the shops got damaged. Shopkeeper Manoj Gupta told that by the time we removed the goods, the rain water rapidly entered inside the shop. Told that the municipal corporation should have cleaned the drainage system before the monsoon.

Under the Smart City scheme, sewage was flowing due to overflow of sewer lines in the smart streets of Pucca Mahal. When the rain stopped, the silt spread in the streets. This increased the slippage. Most of the problems occurred in Bhuteshwar Gali, Vishwanath Gali, Kedareshwar Gali, Chausatti Gali, Manikarnika Ghat Gali etc.

Due to rain, one and a half feet of rain was filled on the railway station road from Sarnath intersection, Japanese Buddhist temple road, Rahi tourist accommodation complex, museum road, due to which people had to face a lot of trouble in commuting.