How much will Draupadi Murmu’s salary be, what powers did you get with becoming the President? 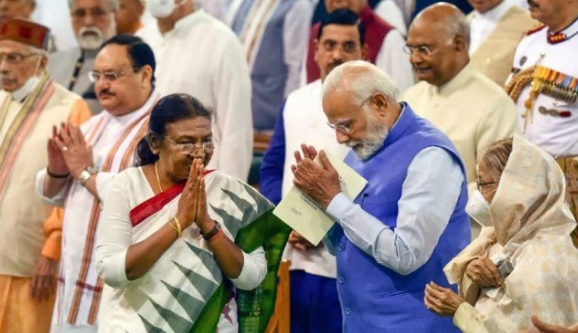 President of India Salary and Powers: What powers will Draupadi Murmu have during her tenure as President? Which constitutional posts are appointed by the President? How many times can Murmu be elected to the post? let’s know

Draupadi Murmu has become the new President of the country. She is the country’s first tribal president. Murmu is the second woman to hold the country’s highest constitutional post. From today all the work of the government will be done in his name. In simple language, the decision will be taken by the central government but the seal of the President will be on it. However, the President cannot exercise his powers without the advice of the Union Cabinet. Despite all this, he has some discretionary powers as well as veto powers.

What powers will Murmu have while he is the President? Which constitutional posts are appointed by the President? How many times can Murmu be elected to the post? Let’s know….

How many times can Murmu become the President?

Once elected president, a celebrity stays in office for five years. After that he has to come back again. There is no limit for re-election. That is, any number of times a person can sit on the highest constitutional post of the country. However, till now only Rajendra Prasad has held this position more than once. The country’s first president was elected twice. He held this position for more than 12 years.

What powers will Murmu have while he is the President?

According to Article 53 of the Constitution, the executive power of the Union is vested in the President. He uses them either directly or through the Council of Ministers. He can declare any area as a Scheduled Area and has powers with respect to the administration of Scheduled Areas and Tribal Areas. He appoints an inter-state council for centre-state and inter-state cooperation.

The President also appoints the Prime Minister, his cabinet, the Chief Justice and other judges of the Supreme Court. Along with this, the President also makes constitutional appointments like the Governor of the states, Chief Election Commissioner, Attorney General.

Does the President also have any veto power?

Ex veto: It can be used only in two cases. First, if a bill passed by the Parliament is a private bill. Second- If the cabinet resigns before a bill gets the assent of the President.

How much salary will the President get?