Ind vs Eng: Suryakumar Yadav broke the sweat of the British, India made a world record of centuries in T20 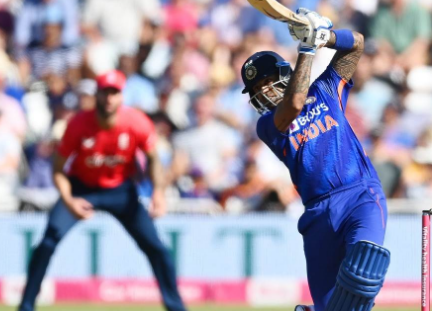 In T20 cricket, India has now reached the top in terms of scoring centuries. Earlier, he stood jointly with New Zealand with 8 centuries but Suryakumar’s unmatched innings made the team number one.

New Delhi, Online Desk. The Indian cricket team won the three-match T20I series 2-1 against England. Batting first, England scored 215 runs in the last match played on Sunday. In reply, the Indian team could only manage 198 runs for 9 wickets. The Indian team was faltering at one time but Suryakumar Yadav’s blistering century took the team closer to victory. He made a special record for India with his 117-run innings.

Even though the Indian team had to face defeat in the last match against England, Suryakumar’s batting won everyone’s heart. Chasing 216 runs, India lost three wickets for 31 runs. From here this batsman took command and made a comeback in the match playing a strong innings for the team. Suryakumar was dismissed after reaching the team on his own for 191 runs. 21 runs were needed in the last over but the lower order batsmen could not take the team to victory.

India made a record of centuries
In T20 cricket, India has now reached the top in terms of scoring centuries. Earlier, he stood jointly with New Zealand with 8 centuries but Suryakumar’s unmatched innings made the team number one. India now has 9 centuries in T20. New Zealand is at number two while Australia is in third place with 7 centuries. 5 T20 International centuries have been made by West Indies.

A+ CBD Oil How To Relieve Joint Pain, Mentally Stress