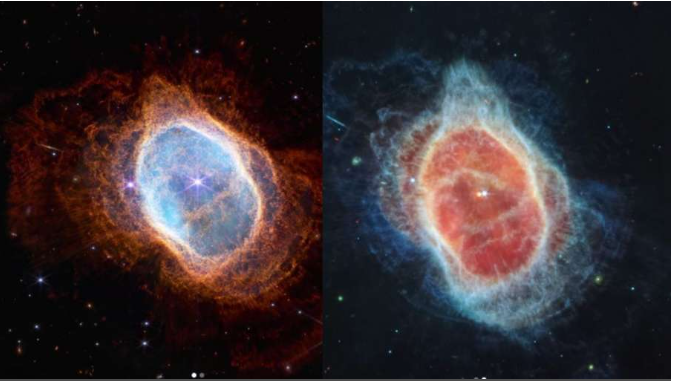 The Southern Ring Planetary Nebula, located 2500 light-years from Earth, was hidden from astronomers until now. But now with the help of the James Webb Telescope, scientists have got a closer look at the dying star in the center of the nebula.

NASA’s telescope captured a special pictureJames showed the death of the star, the star is at a distance of 2500 light years from the earth

James Webb Space Telescope: The Universe is infinite, due to which it is difficult to tell about its end not only in physics but also in imagination. By the way, even in the past, people living on the earth have seen the view of the earth from space. Apart from this, the US space agency has seen pictures of many amazing things including galaxies and black holes taken from NASA’s Hubble Telescope. But at this time NASA’s James Webb Space Telescope remains very much discussed. It has started sending very beautiful pictures from space to Earth. James Webb captures the photos using his infrared camera.

Now this NASA telescope has shared another surprising video. In which the last moments of the star have been captured. NASA has shared pictures of this. Sharing the pictures, NASA wrote in the caption, ‘Webb has given us a ring.’ According to reports, the Southern Ring Planetary Nebula has been recorded in James Webb’s video. NASA has given information about this in its blog. He has told that these planetary nebulae are balls of gas and dust, which emanated from dying stars.

The nebula is 2500 light years away from Earth

The Southern Ring Planetary Nebula, located 2500 light-years from Earth, was hidden from astronomers until now. But now with the help of the James Webb Telescope, scientists have got a closer look at the dying star in the center of the nebula. Earlier, NASA shared a picture of the beautiful spiral galaxy Messier 74 (or NGC 628) taken from James Webb. This galaxy is located at a distance of 32 million light years from us. Where there are 100 billion stars. Also, two big hands-like shapes are seen near the Galaxy. This is the reason why the eyes of astronomers around the world were fixed on these pictures. For those who are interested in the world of space, these pictures are very special.

Space-based telescopes allow us to see certain ranges of light, which are unable to pass through Earth’s dense atmosphere. The Hubble Space Telescope was designed to use both the ultraviolet (UV) and visible electromagnetic spectrum.

JWST is designed to utilize a wide range of ‘infrared light’. This is a major reason why JWST can look further back in time than Hubble.

Galaxies emit a range of wavelengths on the electromagnetic spectrum, from gamma rays to radio waves. All of these give us important information about the various physics happening in the Galaxy.

When galaxies are near us we can examine a wide range of these wavelengths to see what is happening inside them.

But when galaxies are far away, we no longer have that facility. The light from the farthest galaxy, as we see now, is stretched to red wavelengths due to the expansion of the universe.

This means that some of the light that was visible to our eyes when it was first emitted has lost its energy as the universe expands. It is now in a completely different region of the electromagnetic spectrum. This is a phenomenon known as ‘cosmological redshift’.