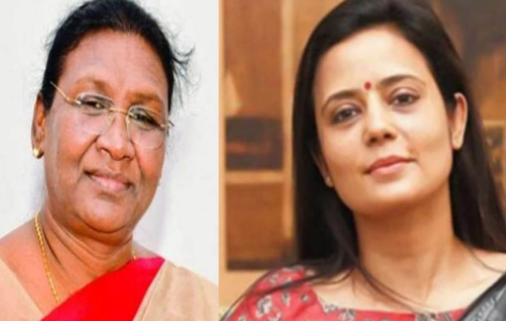 To minimize the ill-effects of Mahua’s statement on behalf of Trinamool, BJP leader Dilip Ghosh’s statement about Mamta is being made an issue so that damage control can be done to some extent.

Kolkata, Jaikrishna Vajpayee. BJP-led National Democratic Alliance’s (NDA) candidate Draupadi Murmu’s victory in the presidential election is now just a matter of time. BJP has enough votes of MPs and MLAs that it is not going to face any problem. Apart from allies, there is no doubt about the victory of Draupadi Murmu after getting assurances of support from many other parties as well. But trouble has increased for West Bengal Chief Minister and Trinamool Congress supremo Mamata Banerjee, who is leading the opposition unity for the presidential election. This can be gauged from the fact that Yashwant Sinha, the opposition’s presidential candidate, has been barred from coming to Bengal for campaigning.

Sinha was the national vice-president of Trinamool, yet he would not come to Kolkata for campaigning. Meanwhile, the remarks made by party MP Mahua Moitra about the deity Goddess Kali for Hindus, especially the people of Bengal, have created double trouble for the Trinamool supremo. At present, Mamta is engulfed in a double ‘religion crisis’ over her opposition or support to Draupadi Murmu and Mahua Moitra’s remarks on Goddess Kali.

After the remarks on Kali, last Thursday, the BJP Mahila Morcha held a protest in Kolkata demanding the arrest of Trinamool MP Mahua Moitra. file

The trouble for Ms. Banerjee is that if she opposes Mumru, she fears anger from tribal voters, and if she does, fellow opposition parties will be offended. On the other hand, if Mahua takes action against Moitra for the remarks made on Kali, then there is fear about Muslim voters and if she does not, then the hurt to the sentiments of Hindus will have far-reaching effects. This is the reason why there is silence on both these issues from Mamta and her party. On behalf of Trinamool, it has been said only that Moitra’s statement is personal. The party has nothing to do with it.

Here, on the day of Rath Yatra on Draupadi Murmu, on July 1, Mamta had said, ‘Her party is not against tribals and women. If the BJP had told earlier, then there could have been a consensus. On the other hand, during a government program on Thursday, on Mahua’s remarks, he had advised in gestures that people’s feelings have to be understood. He said, ‘Mistakes can be corrected. I think we always insist on creating controversy on any negative issue.

The BJP is quite vocal about the remarks on Goddess Kali. From protests against Mahua, FIRs are being lodged in the police stations. On Sunday, Prime Minister Narendra Modi said in a digital program organized by Ramakrishna Mission and Math, ‘Everything pervades the consciousness of the mother. Swami Ramakrishna Paramhansa was such a saint, who had a clear vision of Maa Kali. He had surrendered everything at the feet of Maa Kali. He used to say – this whole world, this variable and constant, everything is pervaded by the mother’s consciousness. This consciousness is visible in the Kali Puja of Bengal. This same consciousness is seen in the faith of Bengal and the whole of India and when the faith is so pure, the power guides us.

Whether it is Mamata’s advice or BJP’s attack, there is no difference on Mahua. He is a constant attacker on BJP. After the PM’s statement on Sunday, Mahua tweeted, “She will advise the BJP troll incharge of Bengal to tell their bosses to stop commenting on things they may not know about.” He has said a lot which is not in the category of dignity. On the whole, Mahua is adamant that Kali is a meat and alcohol-drinking goddess, which is believed to be supported by the documentary film, which depicts Goddess Kali smoking a cigarette.