These are the 6 MLAs of Haryana, like Sidhu Musewala received the threat of murder, 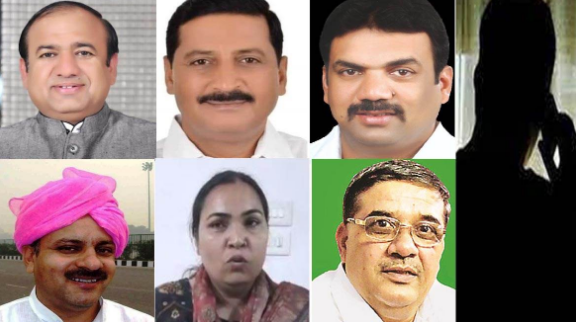 Six Haryana MLAs were threatened with murder like Sidhu Musewala. These MLAs include Renubala Kuldeep Vats Subhash Gangoli Surendra Panwar Kanwar Sanjay Singh and Maman Khan. Everyone received threats from foreign numbers, yet their spirits were not weak.

Panipat/Hisar, Jagran Team. Six Haryana MLAs are getting threatening calls from foreign phone numbers. Lakhs of rupees are being demanded from him and if he does not give, he is being threatened with murder like Punjabi singer Sidhu Moosewala. Among the MLAs who have received threats, one is from the BJP and five from the Congress.

The state government has formed a special task force to investigate the matter. Home Minister Anil Vij himself is monitoring the matter. Security of MLAs has also been increased.

According to Kuldeep Vats, MLA from Badli area of ​​Jhajjar district, it has been seen that some people are chasing him for the last one month. Recently, when they were returning from Hansi, they were chased by four-five suspicious vehicles. A few days ago, when armed miscreants barged into the MLA’s house in Pataudi and thrashed his employee, he had gone to an event in Subana village. After receiving threats from the miscreants, there has been no difference in Kuldeep Vats’ daily routine and interaction with people. Yes, two additional policemen have been deployed for security.

Vats said that he has seen death closely five times during the Corona period. My death is in the hands of God. This threat episode clearly shows that the atmosphere is being created for a long time. He said that he has been threatened with dire consequences for running a campaign against drugs and miscreants, but he is fighting the battle of race and crop and will not back down. He has spoken to the Chief Minister, Home Minister, DGP as well as former Chief Minister Bhupinder Singh Hooda in this regard. Vats has appealed to the government to provide modern weapons, giving exemption to the police team.

Renu Bala, MLA from Sadhaura assembly constituency of Yamunanagar, received a threat call on June 25 from a foreign phone number. The MLA gave a complaint to the Superintendent of Police Mohit Handa in this regard. With the police initiating the investigation, the MLA’s security was increased. They have been provided with five security personnel. After receiving the threat, the routine of MLA Renu Bala has not changed. They are going to all the public events. Recently, former state president Kumari reached Selja district, even then MLA Renu Bala attended the programs with her. The MLA says that it is clear that the MLAs are not safe in this government after receiving threats. They are getting threats, so you can only think about the general public.

Will give security to MLAs, what will happen to common man: Gangoli

Subhash Gangoli, Congress MLA from Safidon, has also been asked to extort Rs 5 lakh by sending a call and message on WhatsApp. As soon as the complaint was received, the police increased the security of his house and office. MLA Subhash Gangoli said that his routine has not changed due to threats. His son is studying in England. Nothing has been said about this with my son. There is increased security at home. They are doing their schedule normally. Gangoli said that it is not only a question of the MLAs but of the security system of the state. The government will provide security to the MLAs, but what will happen to the common man. How will common traders be protected? This will spread the rule of the jungle. The government should control this as soon as possible.

Security has been tightened for city MLA Surendra Pawar. They have been provided with four stenciled jawans (commandos) of the police. Additional police force has also been deployed at his residence. It has also been decided to keep the security of their public programs tight. However, as before, the MLAs meet the general public at their homes in the morning during their stay in the city.

BJP MLA from Sohna said, we are not afraid of anyone

BJP MLA from Sohna Kunwar Sanjay Singh said that the blessings of the people are with him. They don’t need to be afraid of anyone. He said that the state government is serious about this matter. Just as the state government is responsible for the safety of the people in the state, in the same way, the responsibility of protecting the legislators is also on the government. Fear-free governance within the state and our government is capable of dealing with such activities. The MLA said he was not bothered about the threats. He is constantly meeting the public and participating in public programs.

At the same time, Congress MLA Maman Khan Engineer said that he had received threats on phone through international call during 23 and 24 June. They are not worried about it at all. I am not afraid of such threats, I have with me the blessings and prayers of the people of Ferozepur Jhirka area. I’m not worried at all. He said that although this matter is serious, besides me, other MLAs have also received threats, it should be investigated. On the other hand, after the threat received by both the MLAs of Mewat, the security of Kunwar Sanjay Singh has been increased while the security of Maman Khan Engineer has not been increased yet.