Very confident of PM Modi, those qualities of Draupadi Murmu, due to which NDA made presidential candidate 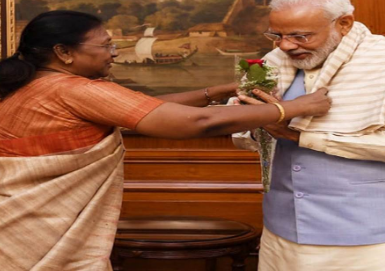 Draupadi Murmu Presidential Election The Governor of Jharkhand remained the longest, the entire term was beyond controversies. His major achievement was the development of higher education and the launch of the Chancellor’s Portal. She remained in this post even after the end of the governor’s term.

Ranchi, State Bureau. Draupadi Murmu, President’s Election Draupadi Murmu, a very trusted friend of the Prime Minister of the country, Narendra Modi, held the post of Governor for the longest time in Jharkhand. Even after completing the tenure of five years, she remained in this post. In this way, his tenure lasted for six months and 18 days. She held this post from 18 May 2015 to 13 July 2021. The biggest thing is that his entire tenure was without controversy. As the Governor of Jharkhand, Draupadi Murmu was always alert and ready for the interests of tribals and girl students here. In this regard, several times he called the officials of various departments at the Raj Bhavan and gave necessary instructions.

Draupadi Murmu, as governor, returned a bill relating to amendments to the CNT-SPT passed from the assembly by her own government. Not only this, he returned the file related to the formation of Tribal Consultative Committee (TAC) in the present government. However, the state government later amended it and abolished the role of Raj Bhavan in it. The present Governor has also held the formation of TAC wrong after taking legal advice.

Draupadi Murmu’s name had emerged as a major contender even in the last presidential election. The logic behind this was being given for his actions and his simplicity. However, in the end, the NDA made the current President Ram Nath Kovind its candidate.

Draupadi Murmu is a vegetarian, ban imposed in the entire Raj Bhavan

Draupadi Murmu is a vegetarian. During his tenure, he had banned non-vegetarian food in the entire Raj Bhavan. The production of meat and fish was also prohibited in the residences of the officials and workers living in the Raj Bhavan premises.

Heightened higher education by being chancellor

Draupadi Murmu, even as a Chancellor, took many important steps in the development of higher education. It was also his great achievement to launch the Chancellor’s Portal, in which the process of filling up registration and examination forms was started by bringing all the universities on a single platform. During his tenure, virtuous and experienced Vice-Chancellors and other office bearers were appointed in the universities.

As the first woman governor of Jharkhand, she made efforts for the establishment of a women’s university in Jamshedpur, after which the Jamshedpur Women’s College was upgraded as a university. Draupadi Murmu was the first governor, who went to Kasturba Gandhi Balika Vidyalayas and tried to know the problems of the girl students studying there. Along with this, strict instructions were given to the officials of the concerned department to solve their problems.